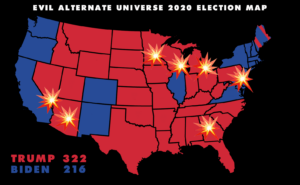 This month’s election could’ve gotten a lot uglier than it has been – which, relative to a lot of prognostications of complete anarchy during and afterward, has been pretty smooth, despite the wails of pain emanating from MAGA Land. The voters of seven cities/metros: Atlanta, Detroit, Las Vegas, Milwaukee, Minneapolis, Philadelphia, and Phoenix really made the difference between a second term for Trump and the end of his regime – and unsurprisingly are the targets of fraud accusations in the dying throes of his presidency.

This is less frightening to talk about than it would’ve been last month, but those of us who wanted Trump gone could’ve been, well, screaming at the sky right now has things gone differently. Picture some of the worst-case scenarios coming to pass and the conversations we’d be having if Russia had successfully brought down the power grids in those cities on election day. Or armed caravans of MAGA terrorists attacked voting places there and burned hundreds of thousands of ballots, and enough of those states got tipped toward Trump as a result. Do you think the MAGA trolls be magnanimous while we cried and raged? Would they think a do-over was fair? Might they be supportive of some sort of compromise to make sure those people’s votes counted?

Of course they wouldn’t. They’d be spiking the football and doing a whiteboy dance, posting “cry more libs” comments until the cows came home, and then some more. Like I said prior to the election, this was a zero sum game and it didn’t matter how Biden won, they were going to be crying that Trump was cheated no matter what.

But now that Biden’s win has been certified, there is a question of purpose here however – how many Trump fans sincerely believe all of this bullshit about Dominion and Venezuela and whatnot versus how many of them are just saying it because they’re frustrated and disappointed that their Dear Leader lost? I mean, we can pretty much conclude Trump himself is mostly the latter, and is simply spouting this nonsense to keep his grievance-fueled base fired up to donate to his legal defense fund after he’s out of office. So a good portion of this bitching is mere trolling.

You could say the same about us in a way. Leaving aside the very real concerns over the long term damage this does to American democracy and trust in elections (which I’m not sure if they necessarily somehow disadvantage candidates preferred by voters who largely believe their ballots were counted 99.999% fairly and accurately – i.e. Democrats), what are we commenters on the Blue side talking about on the stories of Trump’s failing effort to contest the results? Mostly mockery and derision, which we have certainly earned the right to do.

We’re not taking it far enough though, in my not-so-humble opinion. After all, it was those of us who wanted Trump gone who sweated through months and months of implicit and explicit threats to what in hindsight was a secure and fair election, while the MAGA kids responded to our concerns with “lib-owning” like this:

kjaco • 9 months ago
Here is comes. What is the Dems #1 ploy? To accuse their opponents of their wrong doings. No one messes with elections more than the ID not required Dems.
Wed, 2/12/2020 5:49 AM on ‘Senate GOP blocks three election security bills’

Steve Rogers ✓ᵈᵉᵖˡᵒʳᵃᵇˡᵉ™ • 10 months ago • edited
How in gods name is Russian hacking the Ukraine a threat to US election security ?, unless of course they are worried about Joe Biden….
Tue, 1/14/2020 9:08 PM on ‘Democrats sound election security alarm after Russia’s Burisma hack’

FirstSpeaker • 3 months ago
There is no valid reason to have mail in voting, except as a way to cheat. The Democrats wouldn’t do it if there was no advantage for them to do it. Going to the polls to vote, in person, just like we always have, is as dangerous to you as going to the grocery store.
Fri, 8/14/2020 12:18 PM on ‘Tester demands answers from Postmaster General on reports of mailbox removals’

The Will to Power • 3 months ago
The Democrat base are low IQ illiterates who can’t write their own names let alone have the cognitive abilities to fill out a ballot.
Fri, 8/14/2020 12:10 PM on ‘Tester demands answers from Postmaster General on reports of mailbox removals’

Funny how all of these fucking tools have in the last few weeks suddenly refashioned themselves into instant experts on “election security” now that their Orange Warlord lost. They didn’t give a shit beforehand. They loved this stuff, because it apparently advantaged their guy. Now their tears are flowing and it’s on us to respond in-kind.

So stop worrying about debunking their bullshit stories about election fraud with facts. They’re nice to have for your own reassurance, but the bottom line this messaging war is a zero sum game and we won. Have some fun with it. Say your brother-in-law works for Dominion and bought himself a beach house with the bonus check from Hunter Biden. Tell them that most of the cats who voted for Joe are dead too. Joke about how Putin’s impending death from Parkinson’s was too much of a distraction for him to manage the election for Trump.

This has been a far too long time coming and they earned it.

These are the kind of @POTUS tweets I like

As we await the Biden Administration’s first press briefing, let’s take a look back at Sean Spicer’s debut as Press Secretary

Biden swears in 1,000 appointees with a stern warning

OAN seems to miss the big news of the day

As he exited, Trump extended Secret Service protection for family

Fox News commentator questions Biden’s pledge of unity when he signs Executive Orders on Day One; Wallace shuts her down

Two minutes after Biden took the oath, unity is screwed

Afterthoughts on the Inauguration

Shep Smith: I don’t know how some people at Fox sleep at night

Trump’s farewell address, if you feel like watching it