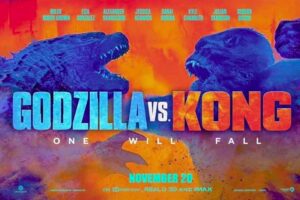 “Godzilla vs. Kong, the forthcoming monster movie from Legendary Pictures, looks likely to be the latest big franchise movie to head to a streamer. Knowledgeable sources tell The Hollywood Reporter that Netflix has made an offer of more than $200 million for the film while WarnerMedia has blocked the deal while preparing an offer of its own for its streamer, HBO Max. Legendary declined to comment while a Warner Bros. spokesperson said: ‘We plan to release Godzilla vs. Kong theatrically next year as scheduled.’ The Netflix offer undoubtedly had allure for Legendary, which financed 75 percent of the budget. As Netflix does not have a presence in China, the film could have played theatrically there.”

“The monsterverse movies, which are the cornerstone of Legendary’s slate, are big international players, especially in China: Just over a third of King of the Monsters’ $386 million global box office came from the movie’s China release. Skull Island grossed $168 million in China, about 30 percent of the movie’s $567 million gross. Godzilla vs. Kong, the fourth entry in the series, is slated for a May 21, 2021 opening but it is far from clear that U.S. theaters will be fully back in business by then and even if they are, the studios face a pile-up of major releases that were pushed due to the pandemic. Meanwhile Legendary is stuck with the cost of carrying an unreleased big-budget film. Though Warner Bros. has only a 25 percent stake in the movie, it controls the release. Decisions on the movie’s fate are being handled at the highest level, with WarnerMedia CEO Jason Kilar and Warner Bros. chairman Ann Sarnoff figuring out an offer for a streaming release on HBO Max that in theory also includes a theatrical component” – Hollywood Reporter.

As we await the Biden Administration’s first press briefing, let’s take a look back at Sean Spicer’s debut as Press Secretary

Biden swears in 1,000 appointees with a stern warning

OAN seems to miss the big news of the day

As he exited, Trump extended Secret Service protection for family

Fox News commentator questions Biden’s pledge of unity when he signs Executive Orders on Day One; Wallace shuts her down

Two minutes after Biden took the oath, unity is screwed

Afterthoughts on the Inauguration

Shep Smith: I don’t know how some people at Fox sleep at night

Trump’s farewell address, if you feel like watching it

QAnon Shaman and Private Jet Karen begging Trump for pardons, Shaman’s lawyer says client not getting one would be good for him