The Gateway Pundit took issue with the number of concurrent viewers at a random time during the White House’s Youtube feed of Biden’s Thursday press conference – omitting the fact that it was also carried by other major networks, both on YouTube and cable television – not to mention other social networks that have live video feed embeds, such as Facebook and Twitter. 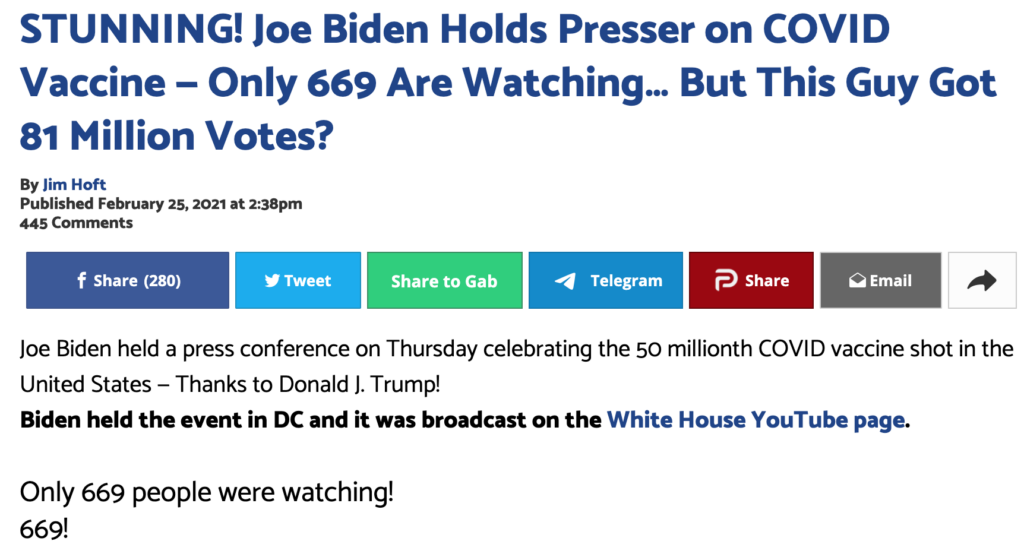 Not shown here is the second and final paragraph of this “article”, which says “And there were 3,800 downvotes and only 209 up votes on the video! And they want you to believe this guy got 81 million votes! These people really are demons. The truth means nothing to these people.”

The Gateway Pundit is fucking garbage. I’m not just saying that because I don’t agree with them politically. I think Palmer Report and Raw Story suck, even if their hearts are (sort of) in the right place. I just have a hard time picturing either posting something this dumb and petty about Trump, and those two can get pretty goddamned dumb and petty in what they choose to cover. National Zero however is proud to be dumb and petty, however. Complete nonsense coverage is an integral part of our brand. If it’s stupid bullshit and we’re fully aware that it’s stupid bullshit that can draw some laughs, then it’s good enough for us – and for our readers too.

Caucasian sentenced to 3 months in prison for baby seal murder

Biden moves to exploit tiff between GOP and corporations

Propagandist lies, “I’m honest about who I am.”

Tucker Carlson’s willful ignorance will end up killing somebody

Kenosha cop who shot Jacob Blake seven times in the back will not face discipline, will return to job

Matt Gaetz’s minions demand CNN retract Trump snub story, as if that article was the most damaging reporting on Gaetz lately

Biden to withdraw US forces from Afghanistan by Sept. 11th

Capitol rioter writes his own little kampf from jail

Tucker only mentions the ‘problem’, left unsaid is the ‘solution’

Cheney warns GOP to move from theatrics to policy

So how would America manage to handle civil unrest and violence related to consumer hoarding in the event of a war with China?

Nimrata re-reaffirms her undying loyalty to the Orange Overlord