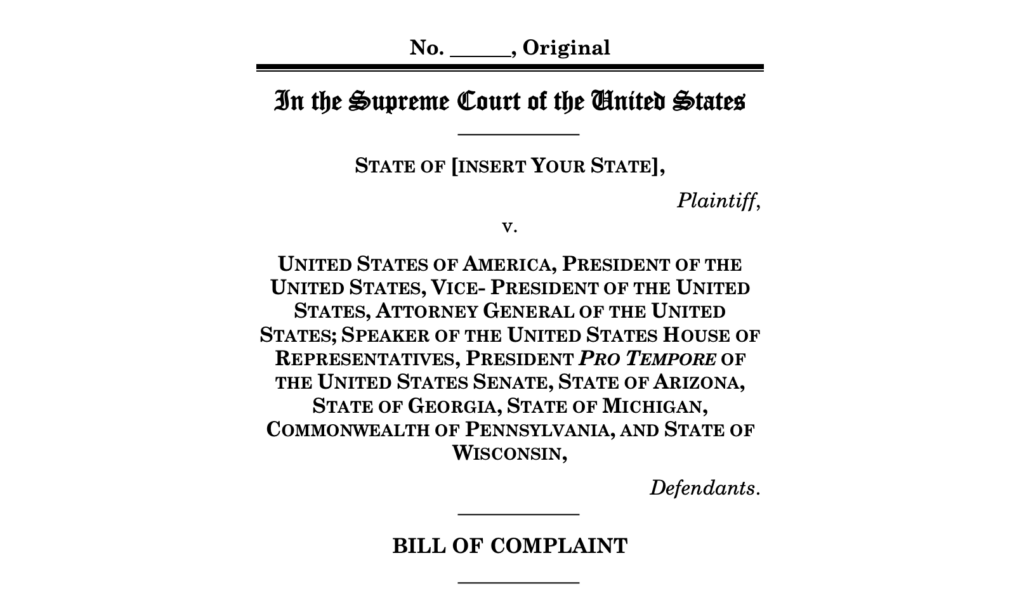 “We are in unchartered [sic] territory as a Nation. The November 2020 election was stolen. Our Country is divided in a manner not seen in over a century. Just last month, 56% of respondents agreed that ‘it’s likely that cheating affected the outcome of the 2020 presidential election’ – a 5% increase since April 2021.1 The fault for this deepening divide lies directly with the federal and state public officials who not only abdicated their sworn duty to support and defend the Constitution of the United States, but in many cases actively sought to subvert it.”

“The Justices of this Court can no longer ignore what the public already sees – a time in history like that which Churchill once characterized as the gathering storm. Revelations of rampant lawlessness by officials in states like Georgia, Michigan, Wisconsin, Arizona, and Pennsylvania (collectively, ‘Defendant States’) involving outcome-changing illegal votes appear daily than voters – just one of many examples of illegal votes. Under express Pennsylvania law, the election should not have been certified” and blah blah blah says MyPillow assclown Mike Lindell’s big 2020 election lawsuit which still hasn’t been filed for want of a state attorney general to join.

Observed Reuters legal correspondent Brad Heath “It’s missing a few things you commonly find in lawsuits, such as a plaintiff and lawyers” and “The claim seems to rely on an Electors Clause theory that the Supreme Court declined to hear last year and a state standing argument that it rejected when Texas sued. And until [insert Your State] agrees to file, the court wouldn’t have jurisdiction anyway… Lindell’s complaint appears to have been written by the same lawyer who drafted Texas’ failed Supreme Court election-overturning lawsuit” and last but not least “It claims that President Biden acted unconstitutionally by not fixing problems in the 2020 election, which 1) isn’t something the president can do; and 2) he wasn’t the president then.”