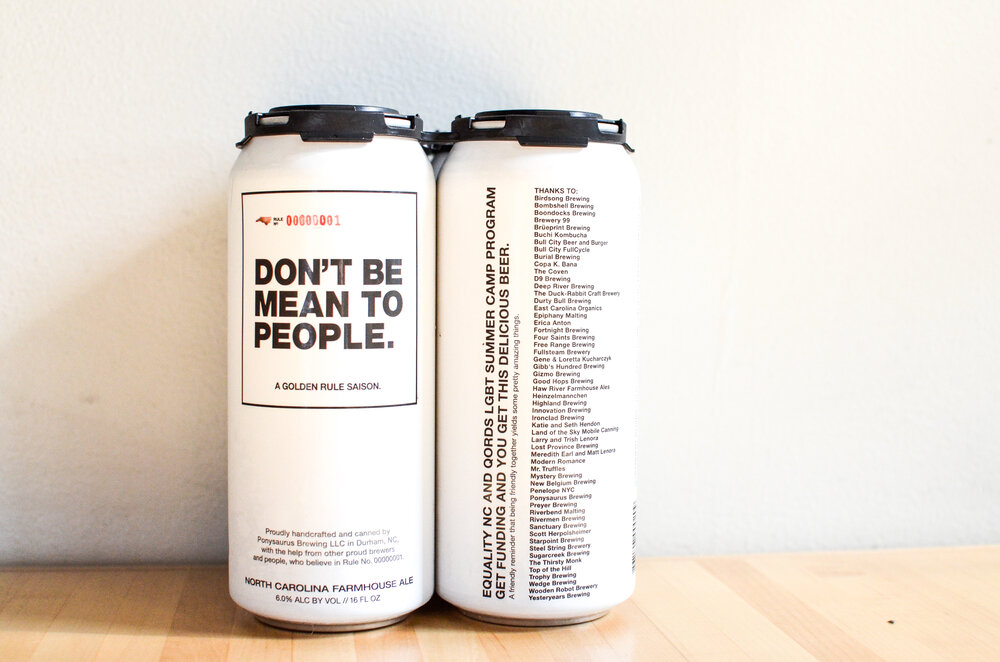 Ponysaurus, a Durham, North Carolina brewery, had introduced “Don’t Be Mean to People: A Golden Rule Saison,” a beer whose proceeds will benefit a fund to help the LGBTQ community after the state’s lieutenant governor referred to its members as “filth,” People magazine reports.

“There’s no reason anybody anywhere in America should be telling any child about transgenderism, homosexuality, any of that filth,” Republican North Carolina Governor Mark Robinson, 53, said in his October speech. “And yes, I called it filth. And if you don’t like it that I called it filth, come see me and I’ll explain it to you.”

“The Lt. Governor said some not very nice things,” a webpage for the fundraiser states. “But Don’t Be Mean to People believes in the goodness of everyone. So we know in his heart he doesn’t believe other North Carolinians are ‘filth.’ We’re so sure of it, we’re helping to fund the good work that could be his greatest act in public office.”

A page about the batch on the brewery’s website explains, “In 2016, North Carolina signed House Bill 2 (HB2) into law requiring transgender people to use restrooms that corresponded to their sex at birth. We believe that this bill violates Golden Rule #000001.
We decided to do something about it. Teaming up with 40+ NC brewers, we created Don’t Be Mean to People: A Golden Rule Saison. Each beer sold fundraises for Equality NC and Queer Oriented Radical Days of Summer (QORDS), an organization that leads camping trips for queer and transgender youth.  Don’t Be Mean to People not only tastes delicious with notes of tangerine and pineapple, but is a friendly reminder that being friendly together yields some pretty amazing things.”