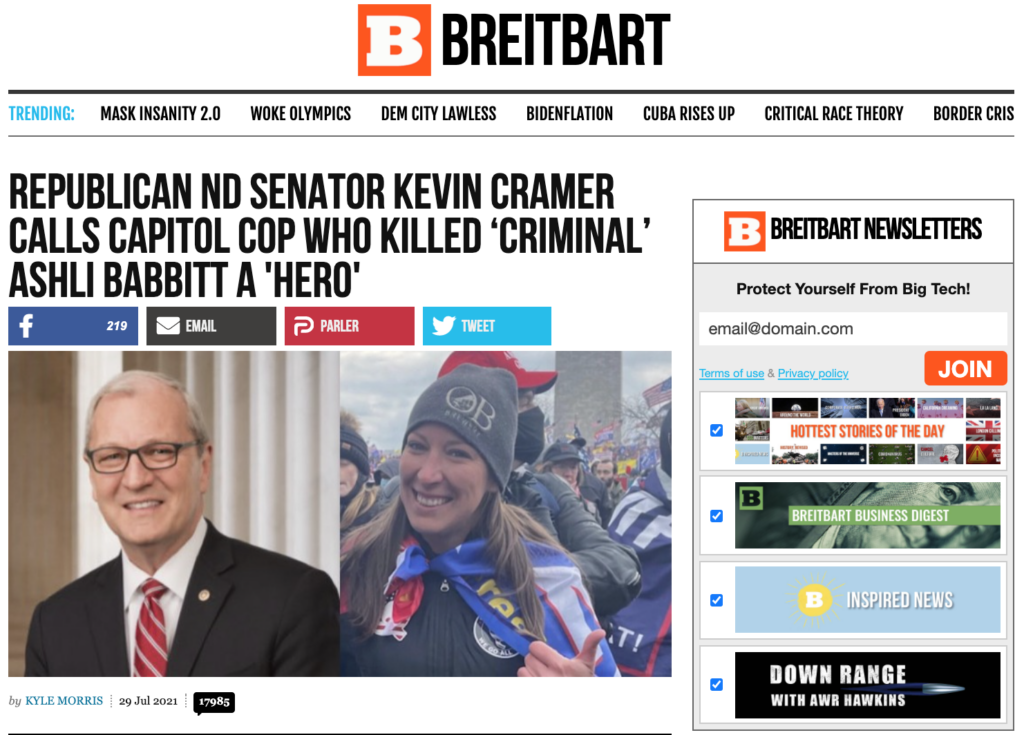 Note: This Breitbart article doesn’t actually exist. We just made it look real in the browser inspector.

We don’t have much at all in the way of regular article formats here at National Zero besides Jack’s Random Thoughts Friday (tonight’s volume XXX!). We do have our tropes like the unnamed, interminably long retrospective style, “Jim Jordan wrestles with [some contrivance]”, and “MAGA Land [reacts angrily to something]”. The “MAGA Land” articles are always simply a comment (sometimes several) plucked from a right wing site, usually but not always the Gateway Pundit or Breitbart, of an article’s top comment – invariably some angry fanboy ranting at whatever the grievance of the day is, or otherwise saying something really stupid, like “MAGA Land inspired by quote from guy who invented the Reptiloids” and “MAGA Land selectively upset over rioting and looting again“. It’s usually easy material to mine for laughs or aghast WTFs for our readers.

On Thursday I’d been eager to see what the animals had to say about Republican North Dakota Senator Kevin Cramer’s comments to a caller on a right wing radio show who demanded to know the identity of the Capitol cop who shot MAGA rioter Ashli Babbitt which we’d reported after a CNN reporter tweeted a transcript on Wednesday. Cramer told the caller the cop was a hero and Babbitt a criminal who had it coming for not complying with law enforcement when they told her to turn around – which, to say the least, is not the official line in MAGA Nation these days. So they’ve canonized this woman, the Joan of Arc for their righteous crusade, made her a martyr and here’s this asshole senator turning the cop into the valiant knight defending his castle from the Saracens.

Should be some easy outrage to find right? After all, we in the mainstream-ish media were on top of it. First and not least on Wednesday was National Zero, then The Hill, Mediaite, Political Wire, RawStory, The Week, Talking Points Memo, so on and so forth. It typically doesn’t take very long for real world stories to percolate into the MAGAverse, but sometimes they slack off. It happens.

I checked Breitbart. Nothing (and they weren’t shy about ripping Cramer along with 16 other GOP Senators for voting yes to advance the infrastructure package). I checked the Gateway Pundit. Nothing. OANN. Nothing. Twitchy. PJ Media. Red State. Town Hall. Daily Caller. Fox News. Powerline Blog. Newsmax. Daily Wire. GETTR. Nothing. No mention. Fucking Parler had two posts on it. Same for Patriots.win (formerly TheDonald.win, formerly r/theDonald). Finally after a good half hour of Googling and searching within the sites themselves I come across this BizPacReview site’s article and put up “MAGA Land rip shit over ‘RINO’ Cramer’s opinion of Saint Ashli” from the top comment.

Something seems off. Like nobody on any of the staffs of the dozen or so top websites in the right wing ecosystem wanted to touch this? I’ve checked again today and so far only two more results came up. American Greatness mentions Cramer’s radio appearance in an interview with Ashli Babbitt’s mom posted late last night, and there’s an article on some site called National File posted this afternoon. And somehow 4chan came up in the Google search.

The Republican Slogan: #JobsNotMobs. The Democrat Slogan: There really aren’t that many murderers in the caravan if you consider how many people there are.

It’s no secret that a lot of the talking points, conspiracy theories, grievances, made-up controversies, and what not in MAGA World originate at the top and flow downstream. In the lead up to the 2018 Midterms we had #JobsNotMobs and #WalkAway astroturfed from some scumbags’ brainstorming session and were propagated by Russian trolls and bots, finding their way into the conversation because your typical fanboy on The Hill has no imagination or creativity to come up with something that catchy on his own. Hell, the anonymous prick who coined #JobsNotMobs described himself as a “mimetic warfare consultant” who charges $200 an hour to come up with shit like that. More recently the outrage over Critical Race Theory was created from whole cloth by some ballsucker named Christopher Rufo because he’s good at making impressionable Caucasians feel threatened by brown people and voting accordingly.

The canonization of Ashli Babbitt herself is happening right out in the open however. There’s not a lot of focus grouping or social engineering necessary to make the whole tragedy a “righteous” cause for Trumpsters, as she was a white military veteran trying to “Stop the Steal” shot dead by a Black cop whose name is being kept from the public and whom the “corrupt” Department of Justice declined to prosecute. Really – besides the obvious incongruity with how Trump fans expressed their feelings for unarmed minority men shot by cops Jacob Blake and Adam Toledo, or even unarmed white men Joe Rosenbaum and Anthony Huber shot dead by a fat Trump-loving teenager who thought he was a cop – you couldn’t have created this situation in a lab any better for the MAGA assholes to rile themselves up about.

So where were Breitbart and Fox News? Why didn’t they get on it? Just a few hours ago Gateway Pundit put up a piece claiming the other woman who died at the Capitol on January 6th was killed by cops there. Why would they pass up an opportunity to sic their flamethrower of impotent rage at Senator Kevin Cramer, a nobody in a caucus full of Ted Cruz and Lindsey Graham’s bullshit?

I’m not saying the same shadowy puppet masters of the right wing propaganda machine told them in no uncertain terms to stay the fuck away from it because they don’t want them painting a target on a conservative senator’s back when the chamber is at a 50/50 Dem majority, I’m just saying I would like to see an explanation otherwise, because I really don’t see why they passed on this story, save for a few outliers – two of which I’d never even heard of before this week.

Now if that’s somehow true, it speaks to a serious amount of sophistication in this nebulously-defined propaganda machine. It’s one thing to push out some shit about how it was really the FBI that started the Capitol riot and let all the goons pick up on it as an article of faith, it’s another thing entirely to have a whole patchwork of outlets loyal to the exiled regime and all of their writers in editors in unison acting like they didn’t see this story on CNN and The Hill. For that reason I’m skeptical of my own paranoia and don’t really buy it.

And yet the silence is kind of deafening. We can say for certain the biggest names in right wing media really did not publish anything on Kevin Cramer’s interview on the Tuesday July, 27th, 2021 edition of the Jay Thomas show (yet) and say with an extremely high degree of confidence that it got on to the radar of a shot caller in the right media universe. There has to be some reason it was not picked up by the Daily Wire. Maybe the reason itself is less important than whether it was the very same reason Newsmax and RedState.com and the rest did not pick it up.