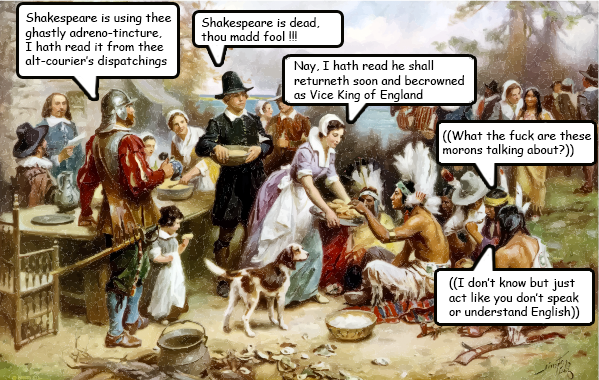 Now that we’re in the sixth year of the Trumpian era of American politics, the old “how to argue with your MAGA uncle on Thanksgiving” article is becoming has become a well-worn tradition every November for pretty much every news site on the internet. They all contain pretty much the same boring, anodyne advice on being patient and asking them questions about why they believe this or that sort of bullshit story and trying not to make them feel threatened and so on and so forth.

We’re not doing that here at National Zero, because in our expert opinion, you’re not going to convert any of these idiots back to accepting reality for what is discernible to rational, educated minds. Instead, have fun with it, and see how long it takes for them to snap with these exciting, innovative tips on how to make these heated exchanges entertaining at least.

Fire the opening shot: Before anyone even says anything controversial, just blurt out that the History Channel is teaching kids to downplay the significance of human contributions to building Stonehenge and the Pyramids with “Ancient Alien Theory” or “AAT”. Tell everyone you’re planning on running for the local school board on an Anti-AAT platform. Baselessly accuse your aunt who’s always reposting Ben Shapiro articles on Facebook of being Pro-AAT and Anti-Earthling.

They’re “right” but for the wrong reasons: When your Fox News-watching relatives complain about how much dinner cost compared to when Trump was in office ask them why he doesn’t do anything about it since he’s still secretly president and Biden’s White House is a movie set on Tyler Perry’s lawn. Get really angry and blame Trump’s second secret term in office for inflation.

Talk about secret discounts: On the other hand, if you’re hosting you can just casually mention how the sweet potatoes came cheap because their farm is located close to a 5G transmission tower, and the turkey was half price since it was a test subject in a Pfizer bird flu vaccine trial. Soros also mailed every American who voted for Biden a free box of Stove-Top stuffing as thanks for helping him further his globalist agenda – but that was far from the only gift you got from him.

Be agreeable, but keep steering it the wrong way: When your cousin Earl starts going off on Tom Hanks being a child sex trafficker, just keep mentioning how Tom Hanks is also a big Kid Rock fan and they hang out all the time. Make it elaborate, and say there’s an alternate version of the music video “Bawitaba” where Tom Hanks is jamming out on stage with Kid Rock. Be sure to add that Tom Hanks tweeted a pic of himself with JFK Jr a few months ago but quickly deleted it.

Don’t back down: When your relative challenges you to back up your assertion that the Virginia governor’s election was hacked by Finland who hate Terry McAuliffe for badmouthing a Saab convertible he owned back in 1995, just keep doubling down and get into details. Yell about how it got terrible gas mileage and the resale value sucked so the Finns vowed revenge on him. Tell them Google is suppressing all the articles about it and they can find it on Bing if they look hard enough.

Complain about how Thanksgiving is actually a pagan, secular holiday: Because it is. There’s nothing Jesus-y about turkey, stuffing, and cranberry sauce. Squanto didn’t believe in Jesus either.

Happy Thanksgiving to all readers and their relatives. We’ll be extra thankful if you somehow trick them into a special holiday donation to National Zero, but you can always do it yourself.