With all the attention lavished on big name Capitol rioters and conspirators like the QAnon Shaman, Oath Keepers founder Stewart Rhodes, Proud Boys leader Enrique Tarrio, Ashli Babbitt, “Cowboys for Trump” asshole Couy Griffin, 3%er Guy Reffitt, and others who were already D-listers in the MAGA social media world beforehand, such as “#WalkAway” assclown Brandon Straka and that “Baked Alaska” chode, many of the unsung villains of the MAGA insurrection tend to slip through the cracks. Even the ones now doing hard time for felonies rarely merit coverage here or elsewhere.

Nothing wrong with that. After all, you wouldn’t be as excited if the next Batman movie featured “Colonel Sulphur” as the main antagonist instead of the Joker. However sometimes you have to slow down and truly appreciate a compelling, if obscure, character when one comes along. 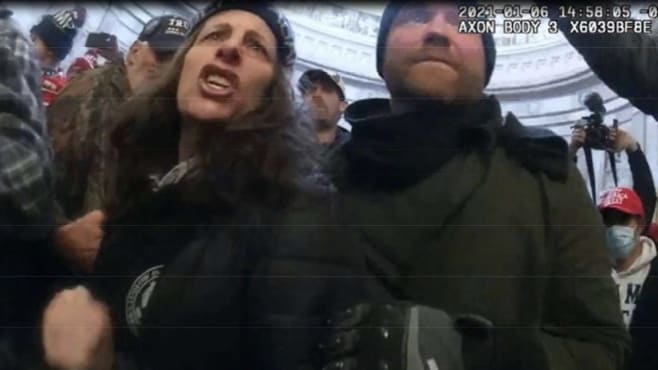 Now while Bauer may not stick out for her actions or other circumstances during the riot as much as the asshole who stole Pelosi’s lectern, or the little Neo-Nazi who stole Pelosi’s laptop to sell it to the Russians, or the dipshit who put his feet up on her desk, or the one with the Confederate flag, or the one who wore his fucking painting business’s jacket with his goddamned phone number on it, the other one who was still wearing his goddamned high school varsity jacket at age 26, or that family of Texas hicks who were all charged together. It’s how Bauer acted after she was charged. 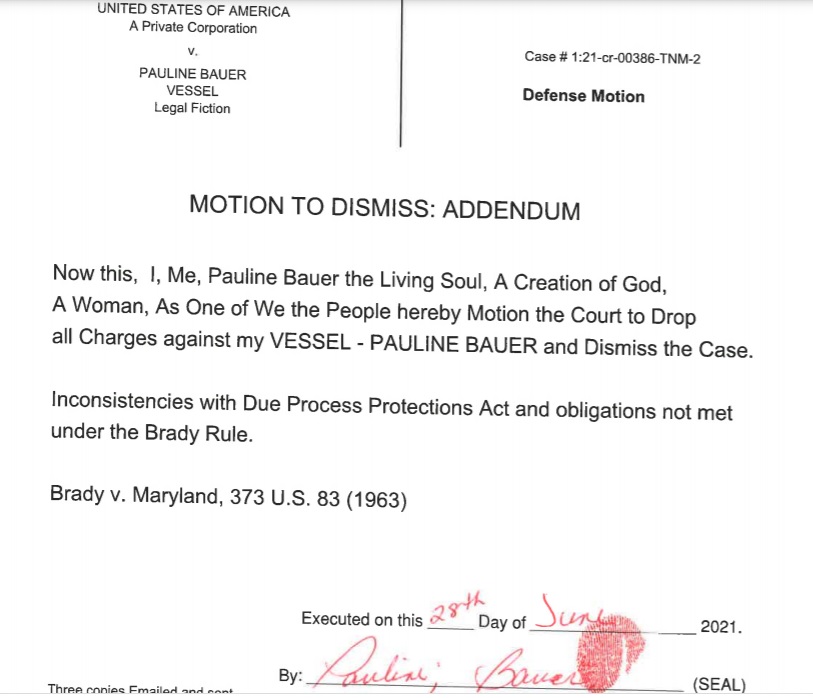 Other websites are labeling Bauer as a “sovereign citizen,” an old chestnut of anarcho-libertarian right wing batshittery that pre-dates the MAGA era by a few decades, and she indeed relied on some of the tropes associated with the movement during her many, deeply cringey exchanges with a legitimate court of law. But calling Bauer merely a sovereign citizen doesn’t quite capture her deranged refusals to engage, as she repeatedly declared herself an incorporeal soul unbound by the machinations of petty mortals like DC Circuit Court Judge Trevor McFadden.

Bauer was jailed at least twice in 2021, the first time after she refused to answer basic questions from the court after the judge refused to let her read a 37-page manifesto during her “divine special appearance” at a preliminary hearing. She was released and then cited “Admiralty Law” and challenged “challenge the court’s jurisdiction and dominion over a living soul” in a later motion. The court assigned her a “babysitter” lawyer even after she attempted to represent herself, but it didn’t work out, as in September 2021 Bauer was jailed again after this exchange captured by then-NBC Washington (now CBS News national) reporter Scott MacFarlane:

“Judge: ‘You’ve shown contempt for the rule of law.’ Bauer then interrupts judge, referencing ‘dominion over the land.’ Bauer says she has diplomatic immunity. And is appearing as a ‘friend of the court. ‘Bauer says ‘it’s pretty clear we are not going to get anywhere’… asks to go to appeals court. Judge shuts down hearing. Bauer never references the argument a court appointed lawyer made on her behalf. Bauer goes back to jail.”

We lost track of Bauer as time passed and other non-Capitol riot news happened. It’s not clear if or when she was released from the clink ahead of her bench trial which concluded Tuesday, as Judge McFadden found her guilty on all counts. Bauer is out awaiting sentencing on May 1st, in front of McFadden again. It’s not clear which way he’ll go with it, but given the time she’s already served he may let her go with probation, even with the felony count. McFadden cannot however release Bauer from the prison of her madness or the ensuing hilarity that made this case so special.