It’s schadenfreude week here at National Zero.  First, Alex Jones gets nailed with a judgment that will cost him tens of millions of dollars.  Then, the killers of Ahmaud Arbery get extended federal prison terms.  And now, Mar-a-Lago gets raided by federal agents.

So what do we know–and don’t know–yet about the raid of Mar-a-Lago.  Well, first, it’s not Watergate:  this is a search done by a federal warrant.  We also know that Trump wasn’t at Mar-a-Lago when the search warrant was executed.  And we know Trump is pissed, but that’s his normal condition.

Editorial Note:  Our normal story format will be altered as news breaks on this.  We’ll be re-upping this story as new information arises, with other stories posted as we typically do.

11:09 p.m. ET:  Florida Republican Governor Ron DeSantis comes out in favor of lawlessness and against enforcing federal laws.  It will be interesting to see how long this tweet lasts if/when an indictment is handed down by a grand jury.

The raid of MAL is another escalation in the weaponization of federal agencies against the Regime’s political opponents, while people like Hunter Biden get treated with kid gloves. Now the Regime is getting another 87k IRS agents to wield against its adversaries? Banana Republic.

10:19 p.m. ET:  Former US Solicitor General Neal Katyal comments on MSNBC that he believes the raid on Mar-a-Lago seems as strong evidence that Donald Trump is the target of a Department of Justice investigation.  He said Trump should be telling his family that “I am looking at jail time” and make plans accordingly.

10:03 p.m. ET:  Levin claims the raid on Mar-a-Lago is worse than Pearl Harbor, the September 11th foreign terrorist attack and the January 6th Republican-led domestic terrorist attack on Congress to undermine the Constitution.

“This is the worst attack on this republic in modern history,” Fox host and deviated septum sufferer Mark Levin whines.

9:40 p.m. ET:  Total speculation on my part, but could the DOJ have had information that Trump or one of his minions was planning on meeting a foreign government (Putin?  The Saudis?  Oraban?) to turn over some of the documents–which is what prompted the raid?  Or could it be that they learned someone was instructed to destroy documents?

“Going back to Hillary, there’s a whole lot of other things.  How about the Benghazi scandal?  How about the Clinton Foundation, I mean, how many, y’know, shady oligarchs from Russia were contributing to that?  Look at, how about Uranium One.  You wanna talk about scandals that were, y’know, never investigated, never vetted.”

9:24 p.m. ET:  Rachel Maddow reports that she spoke with a high-ranking official in the Justice Department confirmed to her that Merrick Garland personally approved the search warrant, and that the search warrant, not a subpoena, was likely approved by Garland because he believed that the documents were on-site and that there was a potential risk that they would be destroyed.  (my paraphrasing of her report. –J)

9:20 p.m. ET:  Jacqueline Alemany of the Washington Post reports that when Donald Trump turned over more than 15 boxes of documents he illegally took from the White House, the National Archives’ inventory of the non-classified papers ran 100 pages; the inventory of classified information was three pages long, and there was some information collected that was so highly classified, it could not be included in the inventory released to the public.

9:02 p.m. ET:  Note that earlier this month, Attorney General Merrick Garland issued a directive that no escalation of an investigation into a candidate for office should take place without the explicit approval of the AG’s office.  We have no verification one way or another that Garland personally approved the warrant application, but it’s likely that someone very high up in the Justice Department did.  (Thanks to Curious TEAM SOROS™ for the reminder.)

8:52 p.m. ET:  MSNBC legal analyst and former US Attorney Harry Litman notes that 18 US Code § 2071, the Concealment, removal, or mutilation generally of federal documents, the law which Trump may have broken by illegally taking classified documents, has as a penalty a lifetime ban from holding federal office.

Whoever, having the custody of any such record, proceeding, map, book, document, paper, or other thing, willfully and unlawfully conceals, removes, mutilates, obliterates, falsifies, or destroys the same, shall be fined under this title or imprisoned not more than three years, or both; and shall forfeit his office and be disqualified from holding any office under the United States. As used in this subsection, the term “office” does not include the office held by any person as a retired officer of the Armed Forces of the United States.

8:30 p.m. ET:  Some fill-in Fox host during Tucker Carlson’s hour:  “How do you explain the [FBI] interest in Donald Trump, but more importantly,” how come they’re not investigating the allegations of corruptions in the White House… like Hunter Biden. 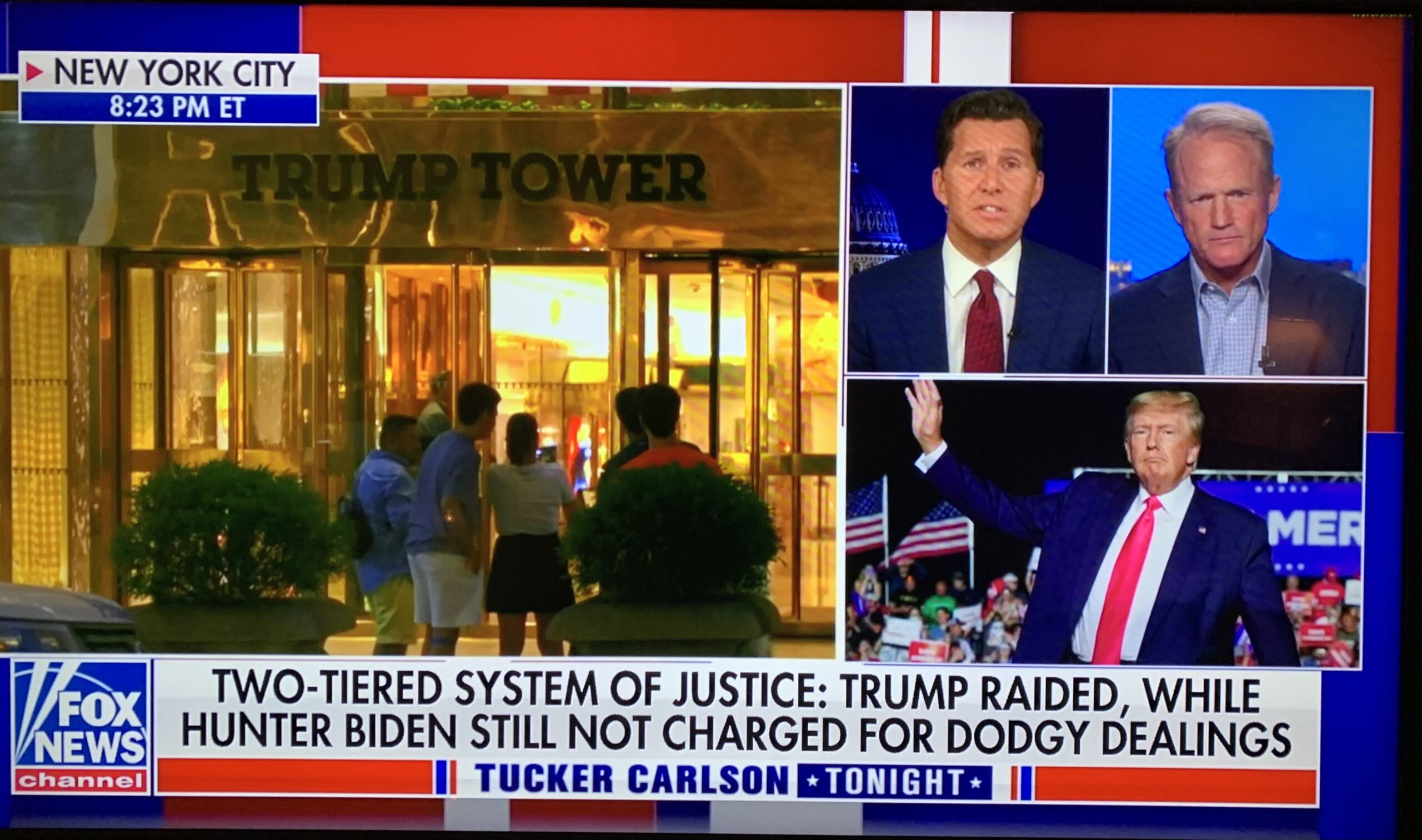 8:20 p.m. ET:  Important to remember that the FBI could be searching for evidence of multiple crimes, but executed under one search warrant because (1) they knew the property was empty because Mar-a-Lago is closed for the season and (2) Trump was in New York.  The warrant could be for people other than Trump–I’m looking at you, Jared Kushner and Don Jr.–related to illegal financial dealings besides Don Sr.’s mishandling of classified material.

8: 15 p.m. ET:  CBS News’ Scott MacFarlane notes that the search warrant application was sealed, which is neither usual or unusual; it just means that the feds don’t want to tip their hand by making information public.

The New York Times reports that the raid involved the issue of Trump taking classified documents from the White House to Mar-a-Lago, 15 boxes of which were not returned until months later when the National Archives inventoried the missing items.  However, as with any raid, law enforcement can collect any illegal information that’s “in plain view” that may not relate to the specific case for which the warrant was issued.

At induction center, Russia conscripts told to fend for themselves

DeSantis privately talking a lot of shit about Trump: report

Ken Paxton fled his home to avoid being served with subpoena

Walker wants you to know he’s got some Native American friends and they’re perfectly okay with Atlanta mascot, so there

Get outside! Look up! Jupiter will be brightest it’s been in 59 years

Dozens show up to Mastriano rally

Kurdish women in Syria stage protests in solidarity with Iranians

DeSantis declared state of emergency for Florida, but only because of an approaching hurricane, not in general as he should

Watch your posture: how you sit, stand determines how quickly oral medications are absorbed into your system, study finds